back to products :: mobile apps 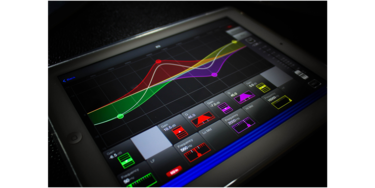 The Soundcraft ViSi Remote is an iPad app which provides wireless control of Soundcraft Si Expression, Si Compact, Si Performer and Vi Series consoles. ViSi Remote allows you to mix and contour your sound from anywhere in a venue without being constrained by cables.

Systems can be configured to run in several ways.

Simply connect a Wireless Router* to the HiQnet port on the console and mix remotely within minutes. * Soundcraft does not guarantee operation with all wireless routers.

Note: The Latest software listed above is needed in order to access the ACS settings of the console. Older software versions would result in no added control benefit from ViSi Remote V1.2.4.
** Vi series consoles will work with ViSi V2.1 but have the same functionality as V1.2.4. Connection reliability has improved in ViSi 2.1 however there are no other new features for Vi Users.

iOS 6 or higher is required to run ViSi Remote V2.1