back to products :: option cards 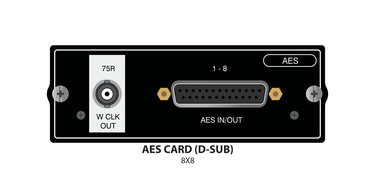 By adding option cards to the Si range of digital consoles, you can interface your desk with a multitude of analogue and digital systems, whilst expanding I/O count beyond that of the standard console configuration.

Routing to and from the option cards is achieved via the 'Patching' functionality on the console. Further cards are always in development and will provide various solutions for interfacing onto emerging networks or devices.

The number of option cards that may be fitted varies by product model, as follows:

The MADI I/O card can establish a 64-channel MADI input and output to a remote device such as stage rack, another console or Broadcast feed to an OB. Optical inputs and outputs are provided on SC connectors and are available in single and multi-mode versions. The auxiliary interface can be used as a redundant link. A Cat5 version of the card is also available.
Part Numbers:
Single Mode Optical - 5019983.v
Multimode Optical - A520.001000SP
Dual Cat5 - A520.005000SP

The Soundcraft® MADI-USB Combo card offers digital audio connection between an Si series console and Apple® Mac® or PC with a USB port as well as any of the Soundcraft range of Stageboxes via Soundcraft’s proprietary Cat 5 MADI connection.
Part Numbers:
5046678.v

This card allows the desk to digitally feed an Aviom A-Net Pro-16 chain. With this standard, 16 mono signals can be fed to any number of Aviom personal mixers (such as the A-16 II), connected in a daisy chain configuration. The A-Net card will be the start of the chain and provide the audio and synchronization data to the chain.
Part Number:
A520.004000SP

This card allows sending and receiving of up to 32 audio channels to/from a CobraNet® network. DIP switches on the card allow setting the number of input or output channels seen by the console. Default setting is 32 output and 32 input channels. CobraNet cards used in Soundcraft consoles must operate as the conductor of the CobraNet system.
Part Number:
A520.006000SP

The single-port Cat5 MADI card needs only one Cat5 cable to run, but redundancy in case of cable failure is not possible.
This card is supplied with the Mini Stagebox when specified.
Part Number:
5033270

The DANTE card connects to an Audinate DanteTM network, and allows the console to send and receive up to 64 channels in each direction.
Part Number:
5031819.V

The BLU link card can send and receive 32 channels onto a BLU link bus.
It interfaces with the dbx PMC16 Personal Monitor Controller, and BSS Soundweb devices which have BLU link ports.
Part Number:
Available from BSS Audio

The Multi Digital card is a great tool to add recording functionality to the Si consoles.
It provides a 32x32 USB interface (PC only), and a 32x32 FireWire interface (MAC and PC). In addition, there are 8 channels of optical ADAT in and out available on the card.
Part Number:
5024024.V