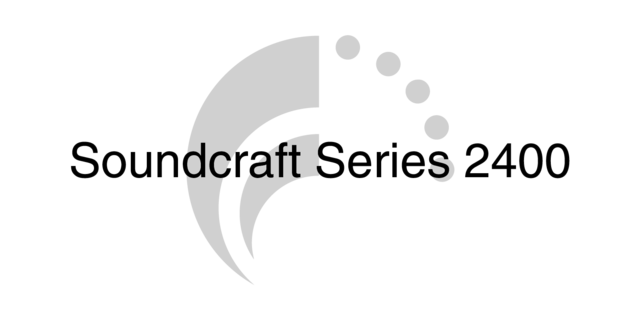 Launched in 1981, the 2400 was a direct upgrade of the 1624 console, incorporating market feedback from this popular console, and continuing Soundcraft’s backing of the ‘split’ format for recording consoles. The alternative ‘In-line’ format was gaining ground, but Soundcraft believed that this was a more confusing and cluttered way of working. It achieved a high degree of sales success through its being packaged with the 762 24-track/2-inch tape machine, from Soundcraft Magnetics. Over 100 2400’s were sold in the first year alone, and the console continued to sell well until 1986, undergoing a facelift from brown to dark grey in 1985, in common with the rest of the product range.

Main differences from the 1624 were full 24-bus routing from each input, and full 24-track monitoring as standard. (A 16-track monitor version was still available at lower cost).

The meterbridge was available with either VUs for each track, or a hi-tech 40-segment LED bargraph overbridge. This had globally switchable Peak or VU ballistics, a phase correlation meter, and a unique 27-band, 1/3 octave spectrum analyser mode, which measured the stereo mix.

A VCA fader and mute automation system was available, using the technology of the day which necessitated storing the automation data on a spare track on the multitrack tape. Few of these systems were ever manufactured.