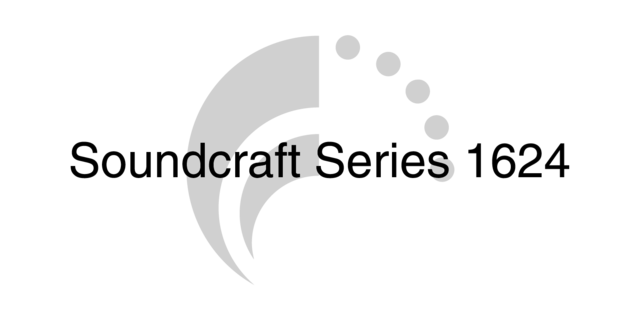 Launched in late 1979, the 1624 was conceived as ‘A 16/24 track recording console for the 1980’s’. The console continued the philosophy of the ‘Split Format’, which allowed engineer and producer to work side-by-side at the console, the producer safely experimenting with the monitor mix on the right hand side of the console, whilst the engineer concentrated on what was going to tape from the inputs on the left.

The console was built in a new modern frame, and used flat ribbon cables for the first time as bussing, rather than hard motherboards, and new types of pots and switches which were more precise in operation. New control knobs were also used, and for the first time were custom-made for Soundcraft, rather than the off-the-shelf knobs of earlier consoles.

Features were similar to the 3B, but more integrated into the main modules, so that manufacturing was easier. There was a meterbridge that appeared to ‘float’ above the console, and this only contained meters, rather than the routing switches of the 3 and 3B. The routing on the 1624 was integrated into the input modules. The output section had the most comprehensive monitor section yet, with a three band EQ with sweep mid, and a unique arrangement of floating Pan and Aux sends, which could be assigned to either the group, for subgrouping, or the monitor section, for recording.

Although the console only had 16 groups, 24-track recording was possible via automatic patchbay normalling, and an optional 24-track monitor module was available which contained 8 simple monitor returns.