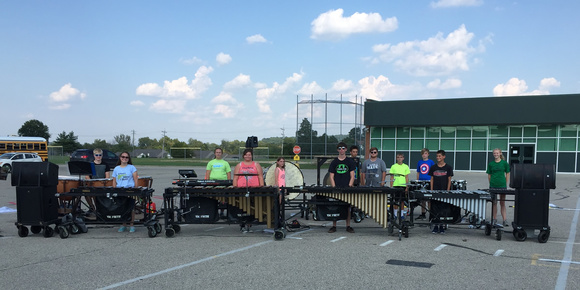 HARRISON, Ohio, USAAs the Director of Bands for Harrison High School, Brian Egan is constantly looking for opportunities to modernize his equipment while the school's marching band continues to grow in size. Egan recently found one such opportunity with HARMAN's Soundcraft Ui16 remote-controlled digital mixer. The 16-input Ui16 gives Egan the freedom to control the sound of the band from any connected device via a standard web browser.

In his years overseeing the Harrison High School band, which comprises students from grades seven through 12, Egan's task has been to grow the band's size and proficiency. "When I started four years ago, all the equipment we had was outdate, but boosters have helped up modernize our technology," Egan said.

For this year's football season, the marching band's pit will be located on the sideline on field level for the first time. This posed an opportunity and a challenge for Egan. "I wanted to be able to conduct the band from my tower on the sideline as well, so I needed something portable but high-performance," he said. "A colleague of mine is a big Soundcraft fan and recommended the Ui Series."

Providing the unprecedented ability to mix audio from any Wi-Fi connected device in any location, the Ui series mixers feature an integrated, onboard Wi-Fi router and can be controlled via a tablet, PC or smartphone. They feature cross-platform compatibility with iOS, Android, Windows, Mac OS, and Linux devices, and can use up to 10 control devices simultaneously. In addition, the 12-fader Ui12 and 16-fader Ui16 each feature built-in HARMAN signal processing from dbx, DigiTech and Lexicon, including dbx AFS2, DigiTech Amp Modeling, and more. Both models feature fully recallable and remote-controlled mic gain and phantom power, along with 4-band parametric EQ, high-pass filter, compressor, de-esser and noise gate on input channels.

In addition to the marching band, Egan teaches a "Rock Band" class at Harrison High School, which includes instruction on audio mixing. "This is a really fun course and one that's in really high demand—we actually have auditions for the class," he said. "The Ui16's ease of use will make it a great educational tour for students who are interested in audio engineering."

Since putting it to use, Egan has already seen the benefits of the U16. "It's been terrific so far, the ability to mix from a tablet has given us so much flexibility," he concluded. "And most importantly, it sounds great."