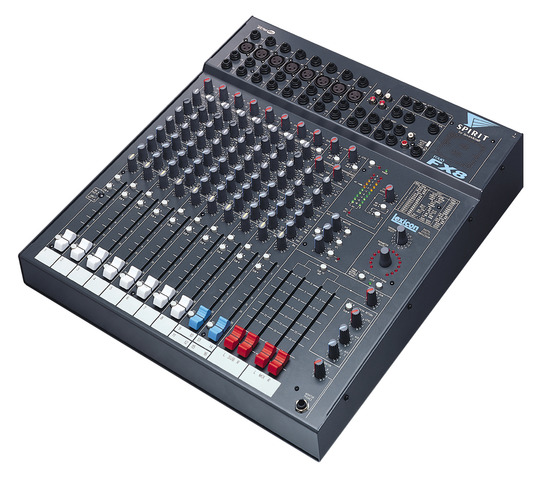 Larger Images
These days there's simply no excuse for a live mixer to give anything away to a studio mixer in terms of audio quality. With its combination of live and recording-oriented features, plus all the usual benefits, the FX8 is ideal for both stage and studio use, and is particularly suitable for live recording.

FX8 is a flexible 4-bus mixer capable of producing Digital sound quality for both live and recording applications. It features a specially designed 16 program Lexicon Effects Section with dual effect capability (including Chorus and Reverb, Chorus and Delay , and Reverb and Delay) and fully editable and storable programs and parameters., The console itself includes 8 mic/line inputs and 18 inputs to mix in total (including 4 stereo inputs and tape return to mix). In addition to the mix outs, two sub-buses allow groups of instruments to be sent to multitrack, to additional speakers, or sub-grouped to mix. FX8's 8 Direct Outs are individually fader pre-post switchable so they are equally useful for recording in the studio or at a gig.

All FX8's 8 mic/line inputs are equipped with UltraMic™ preamp which provides a full 60dB of gain range and +22dBu of headroom, meaning that the FX8 input stage can handle virtually any mic or line device. In the EQ section, a "truly British 3-band EQ" with swept mid benefits from custom designed pots which give greater control across carefully chosen frequencies. There are 2 Auxiliary Sends, including a dedicated Lexicon effects send, 1 pre-fade send and 1 pre/post-fader selectable send which is equally useful as an extra foldback send in monitor-heavy live applications, or as an effects send in studio mixdown situations. In addition, there are four Stereo inputs, a separate Mono Sum Output and 2 Subgroup Outputs.

100mm faders are used throughout, giving more accurate control during complex mixes than standard 60mm designs, and all pots have been custom designed to give even and consistent response around their entire sweep. The use of the latest PCB surface mount technology means that FX8 fits all of these features into a rugged, compact frame which can be optionally rack-mounted into a 10U space.