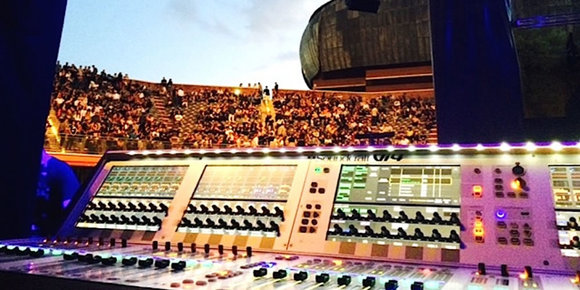 "I think this tour has been the most arduous outing I've put the Vi through to date," said Hatt. "The Vi4 has been thrown about in local trucks, charter flights and endured both extreme heat and torrential rain. In southern Italy we rallied around building impromptu gazebos and placed fans around the desk as the direct sunlight and temperature became too intense, and then in Mexico we had to evacuate the stage after five songs due to an electrical storm. The desk just keeps going and duly boots up every day without issues."

Since most of the programming was done in production rehearsals, a typical show day for the technical team starts with loading in early in the morning, followed by a line-check and a rollback on all the gear. They then return in the evening for another line-check before show time. For Hatt, the absence of backline amps or loudspeakers on-stage and a good separation of microphones to minimalize spill created a pleasant mixing environment.

"The shows we do are dynamic and scene-heavy from a mixing perspective," said Hatt. "Everyone is on IEM's and there are two drum kits, acoustic and electric, the latter providing what can be quite radically different triggered sounds from one song to the next. It's actually been great on this tour to really get a bit deeper into the snapshot capabilities of the Vi4. I've used this desk as a layered analog console for years, but now I've had the chance to deal with it on a more technical level, and I've been very pleased with the results."

Hatt also had the chance of using the Soundcraft Realtime Rack over the course of the tour. It provides industry-standard UAD studio plug-ins to the Soundcraft platform, while its SHARC-based processors run audio over MADI, and ensures DSP stability and sound quality.

"The Realtime Rack gives me a blank canvas to introduce some very high-end plug-ins to the mix," said Hatt. "Though I'm only scratching the surface of this technology on this tour, it's a very elegant solution, and the more I use it the more I like it. Ultimately, it hooks up easily via MADI connections and is a very exciting addition to the Vi environment."