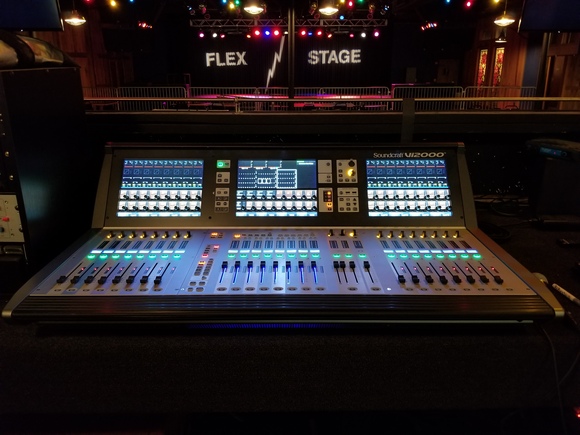 Established in 1966, The Birchmere is a world-class music venue with a 1,500-person capacity standing-room concert hall and a 500-person capacity seated theater. The Birchmere hosts over 300 performances per year from internationally recognized artists such as Lyle Lovett, Ricky Skaggs, Travis Tritt and more. In order to ensure a more streamlined workflow when integrating with professional touring acts, The Birchmere decided to upgrade the analog consoles in both of their venues to state-of-the-art digital mixing consoles. Together with resident audio advisor Tim Kidwell, they selected two Soundcraft by HARMAN Vi3000 consoles and two Vi2000 consoles.

“A lot of the guest engineers coming in didn't want to see analog consoles anymore,” said Tim Kidwell, Audio Advisor, The Birchmere. “Some people started to complain about having to use them, so we knew it was time to upgrade. I've been a real fan of the Vi Series consoles ever since they first came out. I started using them on the road, and not only was the sonic quality impressive, but the interface is superior to a lot of very well known consoles on the market today. The learning curve is quick and easy for anybody converting to a digital board from analog. It's a very user-friendly console.”

Tim selected Vi3000 digital live sound consoles for front of house position and monitor position in the concert hall for their efficiently designed control surface and Vistonics II™ touchscreen interfaces. The Vi3000 is the only console in its class that can be used by two engineers at the same time, allowing resident FOH engineer Justin Kidwell to quickly and easily assist touring engineers.

“I love the layout, it's very intuitive,” said Justin Kidwell, FOH Engineer, The Birchmere. “I've never had to look up how to do anything in the manual, which is really nice. You don't want to have to stop what you’re doing and flip through 200 pages in order to figure out how to turn one feature on or off. There's clear labeling which is so important, especially for guest engineers who have never used the board before.”

“The on-board Lexicon effects are one of my favorite things about the Vi Series consoles,” said Justin. “They’re so nice and warm. They’re some of the best effects I've had to work with.”

“Everybody loves the new Vi Series consoles,” said Tim. “People who have never worked on one before come in and within 15 minutes they're saying; ‘Wow, this is a nice board! Why don't more people use this?’ We've had nothing but positive responses to the consoles.”